Transform light and provide UV protection for your furniture and artwork with innovative, light-diffusing Hunter Douglas sheers and shadings.

Hunter Douglas' cellular honeycomb shades offer superior energy efficiency, helping to keep your home warmer in the winter and cooler in the summer.

Hunter Douglas Roman shades combine the soft look of fabric folds with the operating ease and convenience of a traditional shade, stacking smoothly and evenly when raised.

Hunter Douglas' Woven Wood shades add warmth and character to your space with materials that pay homage to unique textures found in nature.

Hunter Douglas' shutters are available in long-lasting materials and elevated finishes and can be made to fit a variety of windows, including specialty shapes and sliding-glass doors.

The ideal choice for sliding-glass doors or large windows, Hunter Douglas custom vertical blinds are designed in a range of materials, including vinyl, fabric and aluminum​.

Complete your look with Hunter Douglas side panels and drapery. Choose from timeless and on-trend fabrics.

Program your window treatments so that they adjust themselves automatically, creating the perfect room ambiance morning, noon and night.

Transform Your Home with Light

Innovative window treatment designs by Hunter Douglas transform the natural light in your home to create the perfect ambiance, whatever the moment.

See Hunter Douglas videos and learn about the benefits of various types of window treatments.

We offer window treatments for any business or commercial setting.

Our schedule is flexible, and we can come to your home for a consultation.

See current and past decorating ideas from our 'Fresh Ideas' Newsletter.

See window covering solutions for a variety of needs and kitchen styles.

See blinds and shades for angled, sloped, and triangle-shaped windows.

See blinds and shades for arched, half-circle or half-moon windows.

See blinds and shades for bay, bow and corner windows.

See blinds and shades for patio and sliding-glass doors.

See all options for automated blinds and shades.

See our options for blinds and shades that best control light.

See blinds and shades that help save energy at the window.

See blinds and shades for light filtering and UV protection.

See blinds and shades that are safer for children and pets.

From early on, June Amara, the owner of Creative Window Treatments, was interested in design. She graduated in 1979 with an Associate's degree from the Laboratory Institute of Merchandising in New York City. She then transferred to Marymount College in Tarrytown N.Y., where she earned a Bachelor's degree in Fashion Merchandising. June also studied abroad at the Polytechnic of the South Bank in England.

After graduation, she was hired by Lord and Taylor as an assistant buyer for their Fifth Avenue store in Manhattan. From there, June's career shifted from buying to selling when she became a sales representative for a New Jersey based sweater manufacturer. After five years, the Phillips-Van Heusen Corporation hired June to open and run its Dallas, Texas office. She was with Van Heusen for 10 wonderful years before taking a position with Supreme International, the parent company of Perry Ellis International as a National Sales Manager.

June loved the lifestyle her high powered career afforded her but longed for a simpler life and an opportunity to express more of her design talents. A desire to spend more time with her husband and daughter led June to her future. In early 2000, with support from her husband, June and her family gave up the high stress lifestyle for a simpler one. They sold their home in Plano, Texas and moved to Punta Gorda, Florida where most of her family had retired to years earlier.

With her schooling and experience in fashion, love of people, natural abilities and expertise for decorating, and seamstress talents passed on to her by her mother and numerous sewing classes, June and a partner opened Creative Window Treatments in 2003. Additionally, June currently serves on the Executive Board of Directors for the Punta Gorda Chamber of Commerce. 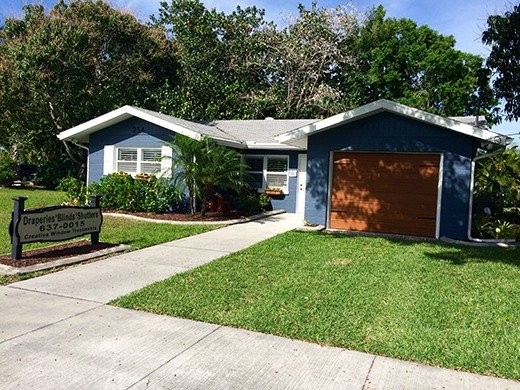 There are no Google reviews yet.

There are no Yelp reviews yet.

We're here to help and answer any questions you may have.

Thank you for reaching out, we appreciate it! One of our staff members will contact you shortly.

Sign up to receive our emails with exciting promotions and on-trend design ideas.

Thank you for your interest.